The History of Woonona SLSC

Our club has two beginnings, the first being in 1913-14 but was disbanded during World War One in 1916 due to the unavailability of a skipper (Captain).

Early in 1920 three well-known Woonona personalities, Alf Burrows, S Gordon, and N Cheaney got together and re-formed the club. The club was then affiliated with the Illawarra Branch in December 1920 and has been affiliated ever since.

While the Surf Lifesaving movement remained steadfastly a male affair, wives and girlfriends of male members were elected to executive positions on the 28th November, 1954 – forming Woonona’s first Ladies Auxiliary, Mrs Jean Crick was elected to the position of President.

The club has patrolled the beach every summer since then with the record of NO Lives Lost at Woonona Beach whilst on patrol. This record is one that the club is very proud of and is in fact the reason for the clubs existence.

The clubs present building was opened in February 1971 and has a hall that is used as a training venue, reception venue for weddings and other functions. The finance provided from this is used in the provision of life saving equipment for the community. Being nearly 40 years old and operating in the harshest environmental conditions, Wollongong City Council began an exterior building refurbishment program in 2010.

The club has had many competitors over the years with the high years of the 50’s and 60’s standing out. Woonona has won numerous Branch, State and Australian medals and has competed in carnivals throughout its history, from the early days with competitors like Jack Dawson in the skis and Don Gray in the water, and on the beach Noel Pittman.

Surf-boat rowing has always been part of the club and crews have always been known as fighters and always giving their best. At the April 2011 Australian Surf Lifesaving titles at Kurrawa Beach Woonona won its first ever Australian Surf boat medal and also won its first ever Surfboard riding medal. The Woonona Veterans surf boat crew of Troy Johnson (Sweep) and crew of Phillipa Lowe, Gina Crick, Kim Gray and Karen Stevens won the bronze medal in the Female Veterans surf boat championship of Australia. Rob Hatton topped off years of hard work to gain a bronze medal in the Masters Long Board riding championship of Australia.

At the conclusion of the 2012 season Gina Crick won Gold in the 55-59 years Australian Championship, our first ever Australian Gold medal.

Recently Woonona has returned to the field of winter IRB racing and the future looks bright. The young IRB crews continue to improve with many good placings achieved during the 2013 NSW State IRB series. The Novice crew with Woody Mackay as Driver won the Gold medal in both the NSW State Novice Rescue and Novice Mass Rescue championship events. Congratulations to Woody MacKay, Josh Clarke, Andy Cole, Tamarah Clarke and Gabrielle Bow. The training and achievements of members in this sport directly relate to improved efficiencies in our patrol duties

The club has been lucky to have fine administrators during its history who have kept it going through some very hard years. Being a small club, it has had to battle many times for its existence and these administrators can take credit for keeping the club going. These people include Ted Marshall (OAM), Don Gray (OAM), Boyd Germyn, Bill McCaig, Phill Geary, John McInally, Peter Evert and Mr Woonona Surf Club, Troy Johnson. This is not an endless list as many people over the years have given up so much time to ensure the club survives.

The club has since the 1960s had a junior section (nippers), currently called the Stingrays, which presently runs fortnightly between October and March. This part of the club has gone through resurgence in recent years and provides the basis for the club to grow on, along with our Rookie program which helps young members not only in surf lifesaving, but also in their life generally.

The Woonona Surf Lifesaving is very club is very family orientated. In the 2012/2013 season the club has more than fifteen families where both parents and children patrol. In his address to Federal Parliament (7/9/2010) David Campbell, the then Member for Keira, spoke about the Woonona SLSC presentation night he attended –

“I acknowledge that club president Peter Evert was inducted as a life member. To receive life membership of any organisation is important. Organisations do not give life memberships lightly and it recognises long-term effort. Peter Evert was awarded his bronze medallion in the surf lifesaving movement at Woonona in 1976, so he has had a long-term commitment to surf lifesaving and to Woonona Surf Life Saving Club. It has become a family affair, with Peter’s children following him into the surf lifesaving movement and into service and membership at Woonona Surf Life Saving Club.”

A result of this family orientation – the members are very “connected” and in season 2012-13, a lot of those families have representatives on the various committees that are needed to run the club. In fact, where normally a minority of members volunteer “behind the scenes”, WSLSC has over 75 members on committees which keep the club ticking. All ages are represented with our youngest committee member being only 16 years old. Woonona Surf Lifesaving club encourages young leaders as that is the future of the club.

The 2012- 13 season also saw a courageous rescue by two of our members, Phillipa Lowe and Jonathon Williams. This highly successful rescue was acknowledged by SLSNSW and in October 2012 this rescue saw the Woonona club be awarded the Surf Lifesaving Australia SLSA Meritorious Award – Group Certificate of Merit with Bronze Insert. 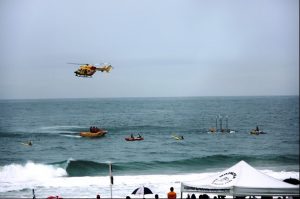 Above photo of the successful Woonona 100th year celebrations with the theme of “Rescue through the Ages”, where disciplines from Reel, Line and Belt were on display, along-side the Westpac Rescue Helicopter.

On the 27th January 2013 saw the achievement of 100 years of Woonona Surf Club formally celebrated at the Lagoon Seafood restaurant with over 250 members, friends, and supporters in attendance. President, Peter Evert acknowledged the history of the club:

“The South Coast times newspaper reported on Friday January 10th 1913 that “A Surf Club has been formed in Woonona” the story goes onto say that there was a timely rescue when a Mr William Thompson rode out on horseback, yes, he rode out on a horse, swimming to the rescue, and succeeded in getting the patient ashore,  a far cry from the Jet ski, IRB, Jet Boat and Helicopter we saw at Woonona Beach today …January 10th 1913…the culture of Woonona Surf Lifesaving Club was borne….

FROM THE OFFICE OF THE PRIME MINISTER of Australia  – CANBERRA

It is with great pleasure that I provide this message in recognition of the 100th anniversary of the Woonona Surf Lifesaving Club.

This is a wonderful milestone for a club with a proud tradition but also an affirmation of surf life saving’s abiding role in the story of our nation.

Since its early beginnings in 1913-14 and re-emergence in 1920, the Woonona Surf Lifesaving Club has established itself as an active and accomplished part of Australian surf lifesaving.

For a century, families and visitors have come to this beautiful part of our coastline, secure in the knowledge it is patrolled by surf life savers who are highly trained and committed.

Even more impressive is Woonona’s ability to sustain its outstanding record of no lives lost, a record we all sincerely hope will continue.

On this 100th anniversary, I pay tribute to the members and supporters of Woonona Surf Lifesaving Club – past and present – for your dedication and service to the community.

You represent all that is BEST, about being Australian.

Our nation is BETTER because of who you are, and what you do.

In addition on the night of our 100th year anniversary the SLSNSW President Mr Tony Haven, presented Woonona Surf Club President, Peter Evert, with Silver Status in the SLSNSW Quality Clubs programme. Woonona is the first ever club to be awarded this status. The quality club program recognises the continual improvements and achievements that are being made within the club and provides members with a sense of pride, and recognition within the surf lifesaving environment, the local community and external stakeholders, including local and state government bodies.

SLSNSW Club of the Year:

After a decade of solid growth by the club, Woonona SLSC were recognised as the 2013 SLSNSW CLUB OF THE YEAR,  a tremendous effort for  a club that grew in ten years from 14 patrolling members, to 116 in this year. Supporting this sustained growth in the club, the 2009 club management committee compiled a Strategic Vision for the club, “2010 Onwards…”. The vision for the future: focussing on LIFESAVING, YOUTH DEVELOPMENT, SUCCESSION PLANNING, AND A FAMILY ORIENTATED CULTURE.

The Executive committee in season 2013 comprised the following:

History was made again for Woonona at the commencement of the 2014 – 15 season with the first ever female Club President, Mrs Stacey Paddon, being elected at the Annual General Meeting.

New members are always welcome at Woonona so that our outstanding record of NO LIVES LOST can always stand. We are a very friendly place to be, for individuals and families alike, so that everyone can come down and have a good time.